It’s that time of year, everyone! Chalk the lines, put the black under your eyes, sniff your smelling salts and hold on tight: the 2019 fantasy football hype trains are about to leave the station! Now that we’re starting to hear, “Player A is in the best shape of his life” and “Player B is really standing out in camp,” everyone’s ADP will start to skyrocket. We’ll still hope that we can buy shares of our favorite sleepers at the current value. However, we know it only takes a couple of hype trains going off the tracks to derail your whole season. It’s so easy to fall in love with uncertainties: New team, new coaching staff, new scheme, better O-Line, etc.

The excitement for NFL training camps opening up only adds fuel to the fire. How can we be certain if a player is legitimately about to catch fire or if he’s all hype? Well you’re in luck, because I’m about to help you steer clear of some hype trains that would be better off staying in the station. Just to be clear, these aren’t players that I think will completely bust and sink your team. I just think they won’t return value at their ADPs, and better, cheaper options will be out there. Some of these players have an injury history, some of them have a new situation that could be worse for them, and some just can’t possibly be as good as they were last year, can they? So without further ado, here is my 2019 All-Hype Team! If anyone on this list deserves all of the hype they’re getting, it’s Patrick Mahomes. I fully realize the significance of Mahomes’ fantasy production last season. He was far and away the best fantasy QB of 2018, finishing a full 4 points per game better than 2nd place Matt Ryan. He set the league on fire with his big arm (and his knack for big plays) on his way to the NFL MVP award in just his first season as a starting quarterback.

At this point, however, I cannot justify drafting Mahomes at his current ADP of #39 overall. He was an absolute steal in a lot of drafts last year, but with such monster numbers, he has to be considered as a prime candidate for regression. Even with his unique skill set and tremendous arm talent, as well as playing in an Andy Reid offense, it’s hard for me to envision Mahomes getting back to 5,000 yards and 50 TDs. I predict he’ll still have a great fantasy season and I wouldn’t be surprised to see him repeat as the #1 fantasy QB in 2019. At #39 overall, however, the price tag is a bit too steep for me. There are lots of people out there who drafted Le’Veon Bell in the 1st round of their fantasy drafts last season. If you were one of them and you were wise enough to handcuff him with James Conner late in your draft, it likely saved your entire season. Well your regular season, anyway. While Conner didn’t quite provide your team with the Le’Veon-esque production you expected, the near 1,500 total yards and 13 total TDs were likely enough to keep you afloat.

Like Mahomes, though, his current ADP of #15 overall doesn’t feel like great value. He’ll lose carries to a couple of young, talented backs in Jaylen Samuels and Benny Snell. When Conner mentioned that he expects the Steelers to spread out the backfield touches pretty evenly, it didn’t seem to fool anyone. Pittsburgh will obviously go back to using Conner as a bellcow. But will he be able to hold up? As great as Conner was last year, his injuries cost him the entire 2018 fantasy playoffs. If the Steelers overwork him, I’m worried he could have a repeat of last year — banged up more often than not. I’ll be looking elsewhere at #15 overall.

I know I’m probably gonna catch some heat for this one, but Kerryon Johnson might just be the biggest RB hype train of the offseason. Everyone is on board for this one! Everyone loves him and predicts that he’ll break out in a big way, and for good reason. There were times last year where Johnson was fantastic. I recognize the talent is obviously there. I realize that Jim Bob Cooter is no longer in the building, and Darrell Bevell wants to run the football. I see why people are snagging tickets for the Kerryon hype train, but I’m just not convinced that he’ll return value on his current ADP of #38 overall.

In fact, by the time most leagues start actually drafting, I’m sure that Kerryon’s ADP will have climbed to an even less comfortable range. I don’t see the Lions improving enough as a team to ensure Kerryon consistently has favorable game-scripts. His injury history is also a concern for me. He missed games back at Auburn with a shoulder injury, and of course we know about his knee injury last year that ended his season early.

I’m rooting for the guy and hope he does well, but I’m not convinced he’ll hold up for an entire fantasy season. I acknowledge that Kerryon has all the talent to be a fantasy star in the making; I just need to see it from him (and the Lions) before I believe it.

Don’t get me wrong here–even as a Saints fan, I felt awful for Juju when this happened. I love his ability, and he’s proven he can produce in this league. He comes across as a fine young man, has a likable personality, and he seems to be a highly coachable player. He’s also loved by his teammates. We all know that Mr. Big Chest (Antonio Brown) has been shipped to Oakland, leaving all those juicy targets behind in the Steel City. We know the Steelers are in the middle of a cultural shift, and Juju stands to benefit the most from Brown’s absence both on and off the field.

The main issue I envision for Juju is that he wasn’t great against man or press coverage last year. The Steelers are hoping that Donte Moncrief and James Washington can perform well enough on the outside to allow Juju to play primarily out of the slot. Even so, Ben Roethlisberger attempted an astronomical (and career-high) 675 pass attempts last season; that number will almost certainly drop off this year.

All of that being said, I have some doubts that Juju will return on his current ADP of #17 overall (WR6). Like I said: I really like him as a player, wish him all the best, etc. I wouldn’t even be surprised to see Juju finish as a WR1. In my opinion, though, there’s better value out there at #17. 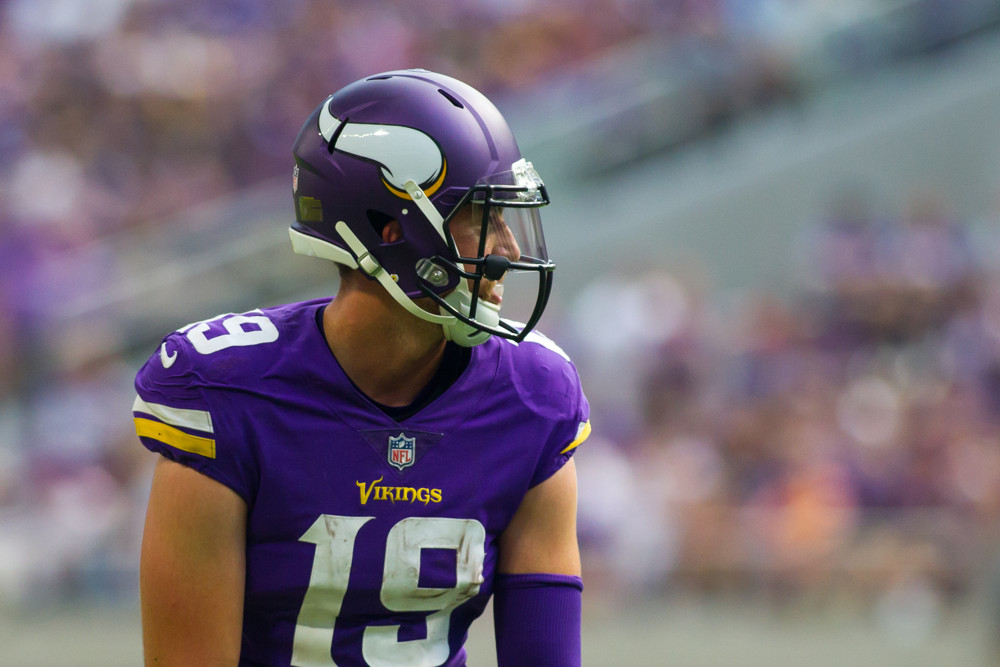 If you’ve owned Adam Thielen in the past two seasons, you’ve likely found yourself enamored with both his fantasy production and his personal story. His background of going undrafted out of a Division II school, working his way onto the Vikings’ 53-man roster, and becoming a household name and a top NFL receiver is certainly a feel-good story.

If you owned Thielen last year, however, you probably noticed the Vikings shift in offensive philosophy and the resulting power-struggle between Mike Zimmer and John DeFilippo. As power struggles between head coaches and coordinators tend to go, Zimmer was victorious and DeFilippo was fired – resulting in Thielen’s numbers taking a hit across the board. When it comes to Thielen this season, I’m expecting that dip in his production to carry over.

That’s a pretty substantial drop-off. If Stefon Diggs can stay healthy, I expect him to outpace Thielen in all statistical categories this year. I think a solid WR2-WR3 season is within the range of outcomes for Thielen, but I don’t expect him to live up to his current ADP of #29 overall.

Tight end was a tough position for me to single out a player–there isn’t a ton of hype surrounding the position in general. After the top tier of Kelce/Ertz/Kittle, we all know that tight ends drop off a fairly steep cliff. As for Howard himself, he isn’t getting an incredible amount of hype, but being the very next tight end off the board after that 1st tier still feels too high for me. His current ADP is #58 overall, which feels a bit pricey for what’s more or less a dart throw at the position.

In order to value Howard so highly, you have to assume that he’ll have a tremendous breakout this season. As with Kerryon Johnson, it isn’t as if I don’t believe in Howard’s talent and physical abilities. However, I won’t believe his breakout has happened until I see it. The arrival of Bruce Arians in Tampa Bay has people excited about the potential fantasy impact he’ll have on the Buccaneers offense. People are expecting a bump for Jameis Winston, Chris Godwin, Ronald Jones III, and to a lesser extent Peyton Barber. Mike Evans is seemingly always a lock as a WR1, but realistically there are only so many touches to go around.

Howard is another one of these players whose injury history is a concern to me. He has yet to play 16 games or amass 50 targets in either of his first two seasons. Howard is certainly talented enough to finish as a TE1 in 2019, but at #58 overall, someone else can take that risk. I’d advise stocking up WR/RB value here and shooting for a Vance McDonald or Jared Cook type later on.