The WAR Against Floor: Upside Matters Most Early In Fantasy Football Drafts

The most common advice given out to those new to fantasy football is completely wrong.

“You can’t win your league in the first few rounds, but you can lose it.”

“Aim for stability in the early rounds, then shoot for upside later.”

On its surface, this way of thinking seems logical. Drafting a player in Round 1 who scores zero fantasy points is going to hinder your fantasy team much more than drafting a total zero in Round 14. Most teams will not get much production out of their 14th-rounder anyway, so the risk of shooting for the moon in the 14th seems much more palatable than it is in the 1st.

Seems pretty open-and-shut, right? There’s probably a reason that most of the biggest and sharpest names in fantasy football all the way up to Matthew Berry champion the “floor early, ceiling later” mantra.

Even Upside Wins Championships evangelist Scott Barrett partially capitulates to this popular narrative. I can’t overstate how important it is for anybody who wants to win at fantasy football to read and absorb Scott’s article, in which you’ll learn that leagues are largely won and lost based on only a handful of players each year. I seriously cannot recommend the article enough.

That said, I believe Scott makes one error. After extolling the virtues of drafting for upside for thousands of words, he caveats, “As we go farther along in the draft the more important upside becomes. Upside maybe isn’t our chief concern in the first round.”

Scott illustrates his point using Wins Above Replacement (WAR), a stat created by Jeff Henderson (@statholesports on Twitter) that you can read all about here. In short, WAR measures the expected number of wins a player will give you in fantasy football above and beyond what an average player would give you. It is the best measurement we have of how valuable a player was in fantasy football in a given year – you want players with high WAR.

Back to Scott’s argument. “Looking at fantasy WAR vs. ADP, since 2015, you’d note that from Round 7 on, our WAR-based expectation turns negative…That’s about when my approach shifts…to becoming far more upside-centric.”

This argument is even more precise than the versions at the top of this article. Starting in Round 7, you are not missing out on much stable fantasy production by shooting for upside. The opportunity cost (what you give up) is near-zero, because average WAR outcomes in round 7 of a draft are near zero.

Conversely, the opportunity cost of drafting for ceiling in round 1 would be quite high, as the average first-rounder can give you many more wins than the average seventh-rounder. You wouldn’t want to miss out on a solid producer like 2021 Alvin Kamara (1.82 WAR, 21st overall) because you were busy chasing and missing on a risky high-ceiling player like Antonio Gibson (1.25 WAR, 49th overall). The opportunity cost of drafting Gibson in round 1 was the additional production and wins you could have gotten from Kamara (if both were available at your pick). “Floor early, ceiling later” narrative pushers would advocate drafting for ceiling where the cost of missing is lowest.

However, opportunity cost is actually the key to understanding why the popular narrative is incorrect. Jonathan Taylor led all players in Round 1 last year with 3.44 WAR. Taylor was the true opportunity cost of drafting either Kamara (who posted close to the Round 1 average WAR) or Gibson (who was well below it). Drafting a player who performs typically for their average draft position necessarily means you are missing out on a player who is vastly outperforming it. And somebody in your league will be playing Jonathan Taylor against you.

Thinking this way, we actually want to draft for ceiling when the opportunity cost of not doing so is highest – to make sure you don’t disqualify yourself from nabbing the next Jonathan Taylor.

How much are you missing out on by drafting an average-WAR player at each point in the draft? We can measure this formulation of WAR opportunity cost by subtracting average WAR in each round from the WAR of the best-performing player in that round. Here’s what the last two years look like. 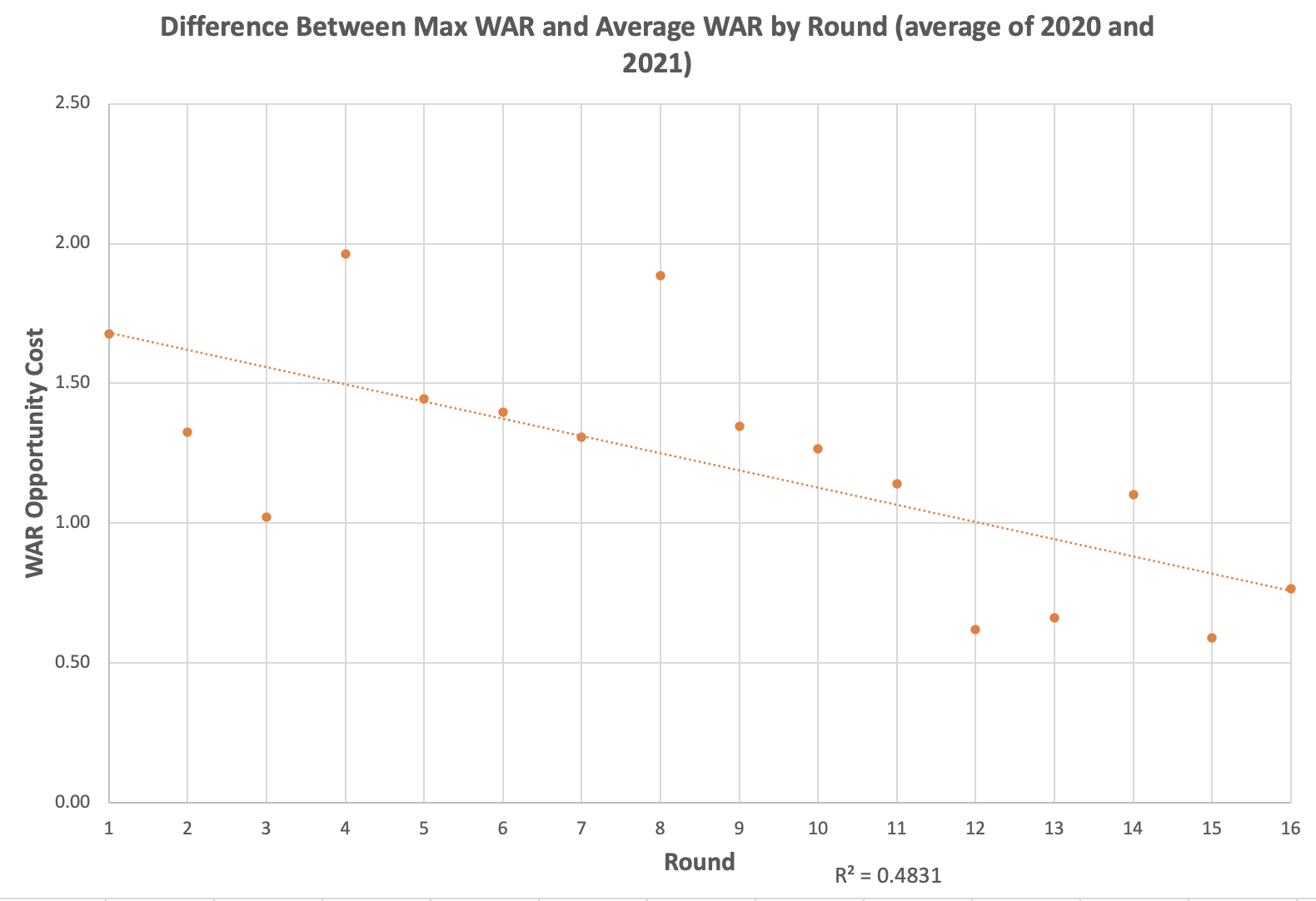 To Scott’s credit, he was somewhat right – Rounds 7 and 8 are places you do not want to miss out on ceiling players. But this is just as if not more true of the early rounds.

When reading this graph, I would advise against over-focusing on individual rounds – the WAR opportunity cost will vary heavily in a given round from year to year, since it is largely determined by the single-best player who emerges from that round. Despite a higher Round 4 average WAR in 2021 than 2020, 2021 Cooper Kupp’s 4.14 WAR had a much larger impact than 2020 Calvin Ridley’s WAR of 1.81.

Instead, focus on the overall trend, illustrated best in the third graph. The opportunity cost of drafting an average player falls as we get deeper into the draft. This is the critical insight to carry into your drafts in 2022: the highest-ceiling players that you must avoid missing out on are thematically drafted in the early rounds. Therefore, draft for ceiling early.

Since WAR opportunity cost falls off later, if you must draft for floor (in a best ball format, perhaps), do it late. You’re much less likely to miss out on the small handful of players who can make or break your fantasy football season.

In fact, to the extent that ceiling exists in the back half of drafts, it is mostly concentrated at the quarterback position. Of the seven players who created a WAR opportunity cost above 1.00 in Round 9 and beyond, four were quarterbacks (Jalen Hurts and Joe Burrow in 2021, Aaron Rodgers and Ryan Tannehill in 2020).

To caveat some myself, these insights are only useful if we have the ability to actually identify players with high potential ceilings. In my humble opinion, my Juggernaut Process is a good place to start. My work aside, you’ll now know to pay close attention to analysis from others that attempts to identify high ceiling players. It is the most important thing to get right in fantasy football.

The next time someone advises “floor early, ceiling late,” send them this article and tell them to yell at me @QBLRyan on Twitter if they disagree.