QB List staff catches you up on everything you missed during the opening weekend of the 2020 NFL season.

We finally sat into our recliners and couches to rebuild our yearly fall outlines, albeit in a much more tense world climate. Can football help us alleviate a bit of weekly stress? Cam Newton is spearheading the Patriots’ offense, the first time in over 20 years the Patriots have a new quarterback and a new sense of creativity, as McDaniels and Bill Belichick no longer have to cater to a creaky-kneed, yet extremely efficient quarterback. And, the Dolphins? Well, as you’ll see, the Dolphins are still mostly just the Dolphins. Perennially disappointing. So, let’s dive in!

Let’s just be honest. Ryan Fitzpatrick is just a bun warmer until Tua Tagovailoa is ready to take over the franchise. Drafted early in the first round, Tua is like the sexy sports car that still needs some minor tweaks to be road-ready, and Fitzpatrick is an average five-year-old car with racing stripes. He didn’t do much well in this game to be completely truthful. He spent the majority of the game under duress from constant pressure without being completely shaken. Fitzpatrick was rusty, and clearly unable to capitalize on a defense that saw almost a full handful of its players opt-out for the season. He still managed to throw three picks to three separate defensive players (Stephon Gilmore, Adrian Phillips, J.C Jackson). If I’m a Dolphins fan, I’m waiting a few weeks to see if they can muster any returning barbs against any teams that are not as strongly coached as New England, and if no salvos are returned, I’m looking to Flores and company to give Tua a shot. Not all to his fault, Fitzpatrick did finish his game completing two-thirds of his passes, but unfortunately, he killed any energy going to Miami by broadcasting his passes, as two of three picks were basically read off the line from his looks to receivers alone. Suffice it to say, this is more of the same. Do not start Fitzpatrick. Do not roster him. Do not be surprised if his job is no longer his in a few weeks.

If you drafted Jordan Howard, I’m terribly sorry. Granted, his ADP was relatively low (86th overall on Fantasypros.com), but even so, you came into this season expecting you had the starting back for an NFL team figured out, only to have the majority of the snap count bolstered by Matt Breida and someone I personally had shares in when Kenyan Drake left last year, Myles Gaskin. Gaskin was not spectacular but was efficient and looks to be slowly gaining some trust much needed to lead a backfield with no true superstar. Gaskin ran for four yards a carry, broke off a ten-yard run, and didn’t hurt the team in pass coverage. He’s also someone who does very well in passing down context, which always helps when you don’t want to broadcast ahead of play if you’re going run or pass. Per the PFF Dolphins page, Gaskin at the half alone had more than doubled the next closest snap count running back (20 to Matt Breida’s 7). Jordan Howard saved his day with a goal-line rush where he basically lurched into the endzone, but I don’t think I’m being too urgent when I tell you to get off your Howard shares as soon as possible, and if you’re in a deep league, potentially speculate on Gaskin first, and Breida second, if either is available.

Devante Parker truly stepped out to end last season when Preston Williams went down with a season-ending injury. Perpetually plagued by either inconsistency or injury himself, Parker seems to have possibly been bit by the injury bug yet again. He made some great catches early on in the game, hauling in every target, but will he and Preston have a role reversal this year? Preston was hardly involved and immediately saw his opportunity arise when Parker was taken out of the game, as he was the target leader, despite only reeling in two of his seven opportunities. There is some value and sneaky talent in this offensive crew, but relying on Fitzpatrick to get the ball to them for a second-straight year may just end up being the biggest issue.

I won’t lie. I’ve been a Cam Newton fan for a very long time. Watching him in college, he was one of the few players that had ever truly garnered my interest from the college stage directly to the pros. Seeing him for almost a decade be either misused by Riverboat Ron, or injury-riddled from poor blocking, it makes me very happy to be able to root for him as a quarterback of my own. We may have finally found a happy medium. Well coached throughout, and given the opportunity to run, Cam shined in his Patriots debut. Employing play action and shotgun quarterback rushes, the Patriots had some life behind center that hasn’t been seen in years with 15 rushes for 75 yards and two touchdowns. He was hard to take down upon leaving the pocket and didn’t make mistakes in the air. If this is what we can expect from great coaching by Bill and the eagerness from Cam to prove his doubters wrong, we may just have a surprising 2020 at our hands. I currently see Cam as a QB1, with upside to end up a top 5 overall quarterback if he can keep healthy throughout the whole season (sadly, that’s a big IF). 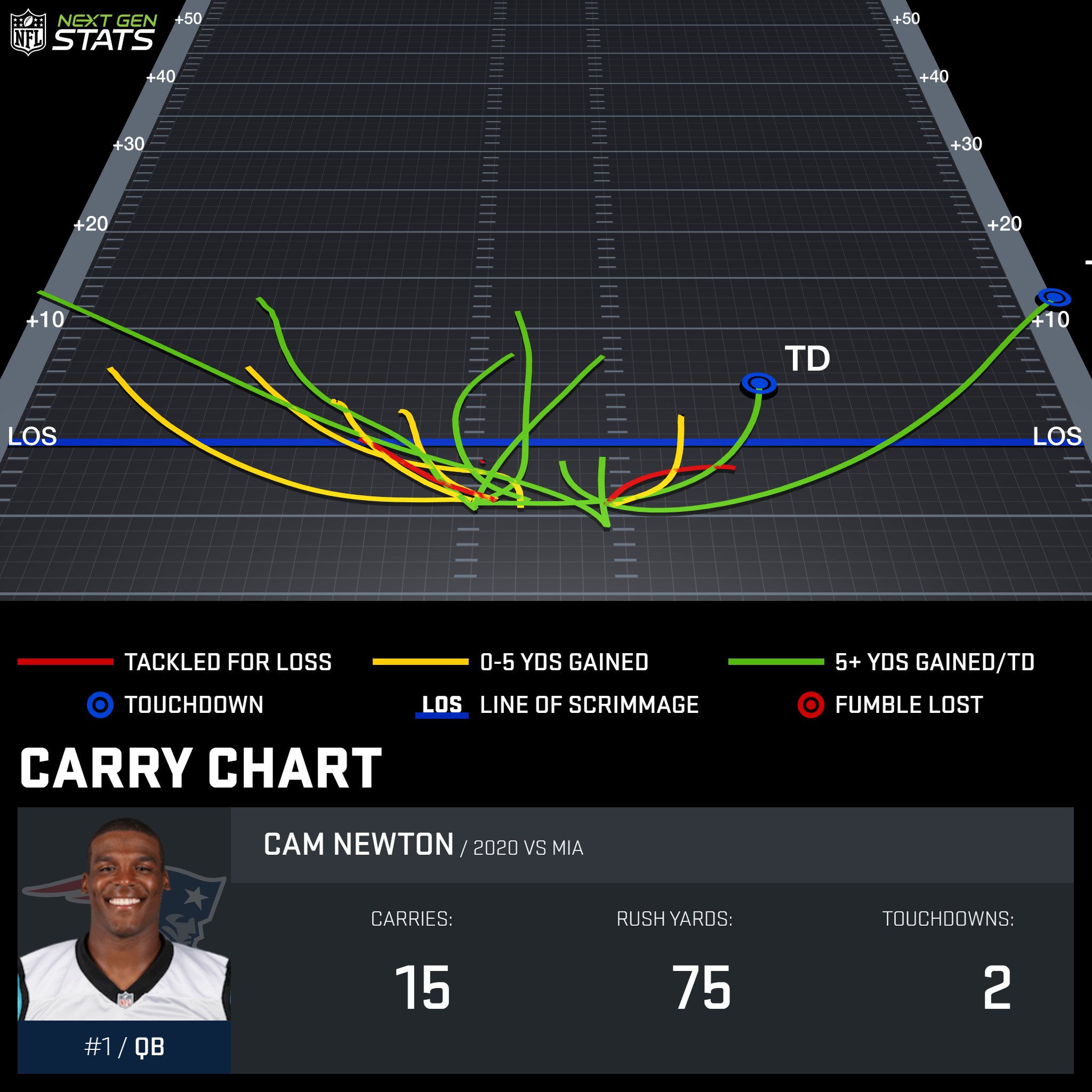 The Patriots employed this quirky four-headed monster in the run game, and it mostly worked. No one really shined, but the one player who did leap off the page when reading through the box score was 53-man roster late addition, J.J. Taylor. Taylor, an Arizona Wildcat, managed to sneak onto the squad with the injury addition of Damien Harris to the injury squad. Taylor was shifty, hit the hole with some burst, and made a case that he may deserve a roster spot over someone like Rex Burkhead or someone else barely hanging on. 4 carries for 28 yards isn’t a huge line, but Sony Michel only managed nine more yards on almost triple the carries J.J. received.  Sony had a long run of seven yards, and mostly did nothing terrible, but didn’t excite. Their best rusher in the game was Newton, and that likely will eat into a lot of the backfield carries throughout the season, so I’d more than anything look for players in this squad who can do multiple things (James White is a great pass-catching back, Burkhead can block pretty well). You have Harris and his return imminent, so expect some rotation and names chewed up and spit out from the current roster alignment, but my favorites to remain would be Sony (due to draft day cost), White, Harris, and J.J. as a dark horse.

The receiving crew took a backseat, as Cam truly led the charge, as the Patriots almost played their offense more akin to Baltimore, and put the ball in Cam’s hands, and gave him the “option” to do whatever he really wanted with the ball. It worked out, and as we sit here, you note the wide receivers catching passes is less than half of a usual box score from years prior. Less dink and dunk, less chip away at the armor and look for a weak spot, the Patriots game planned to wear out the Dolphins with repetitious rushing to the edges, and movement in the air only when necessary. Julian Edelman awoke from his deep, grizzly slumber and took his rightful place again as the Patriot’s anointed number one pass catcher. He covered the middle of the field and helped keep defenders on the balls of their feet. Certainly, in a space for some ebbs and flows, the only consistent names we will see will be Julian and N’Keal Harry as we go along, and this week just began to show that. The Patriots will likely continue to play this style of offense until the receiving crew clicks more with Cam, but for now Julian is still a fringe WR1 and N’Keal has upside to eventually be a WR2.